An exciting weekend took place in Italy where the 4th and last stage of the Challenger Series was organized during the Spring Cup. The Finnish Team Unique confirmed their lead in the senior competition, Junost (RUS) won the junior event. Recap of this crazy day, team after team.


No big changes in the junior rankings
Even with a fall in the Travelling Circle, team Junost from Russia won the Junior event on Sunday. The team scored 129.99 for their free program skated in red and flashy dresses. With their score earned at the French Cup two weeks ago, the team also won the Junior Challenger Series this season (412.47).

Teams Elite (USA) skated to the music “The Sound of Silence” and got 116.43. They had a fall in the second intersection element but collected great levels during the program. They totaled 184.73 for the competition and claimed the silver medal.

The other American team Lexettes made the show in the arena with their free program “Music was my first love”. They performed all their elements with speed and confidence. Their free program brought them 110.89 points, for a total score of 175.20, and finished 3rd.

First team to skate in the last group, Fireblades (FIN) showed their skills on Sunday evening in their free program and finished 4th. The team brought its colors and smiles to the audience and received 102.17 for the free program, and a total of 164.78 points.

Dressed in green costumes, Stella Polaris from Finland presented their free program “Legend of the Jungle” and got 94.49 points. The team had a small fall in the pivot block but the skating qualities quickly made it forget (total: 157.92).

With their free program “Bird Box”, Team Seaside (SWE) created a great atmosphere in the arena. They performed with energy and precision to earn a score of 93.64 (total: 147.56).
In their own ice rink, team Hot Shivers (ITA) was lively supported by their fans and families. With their "African themed" program, they got 83.94, totaling 131.13 points.
Representing Sweden, Team Spirit had some difficulties in their free program with some falls that cost them two deduction points. The team earned 78.68 points and a total score of 125.03. They remained at the 8th place.

Team Ice Fire from Poland presented their black and white angels on the ice on Sunday. The team showed great interpretation. However, the skaters had to deal with bad falls in the block and a skater has been injured. They got 64.63 points for a total score of 103.68 points.

Dressed in red and grey, Starlight (SUI) skated a clean free program to the theme of "Winter" that brought them 65.28 points (total score: 96.42). The most attentive spectators could have noticed that the skaters threw some snow at the end.

The Italian team Shining Blades made a good impression with their dramatic free program. They got 62.95 points and a combined score of 94.56 points to finish at the 12th place.

Team Berlin Juniors (GER) performed a nice free program to the music of "Corpse Bride". They earned 62.28 points on Sunday, 91.72 in total, and remained at the 13th place.

Zagreb Snowflakes from Croatia had a better program than on Saturday afternoon and earned 48.65 for their free program (total score: 59.97).


23 teams in the Senior division!
Team Unique won the Senior division with a huge score of 154.60 points, 236.82 points, their season's best result! Their free program called "Betrayed" was clean and brought them many "level 4" and some judges even gave them 9.75 in the program components.

The other Finnish team earned the silver medal at the Spring Cup, but also at the Challenger Series (456.37). Marigold Ice Unity skated a solid free program to "Notre Dame de Paris" and received 153.60 points, 232.29 points in total.

Team Skyliners (USA) performed a great program with no major error to motivating pieces of music. At the end, the audience enjoyed when the only man of the team was lifted by the girls. The skaters seemed happy with their performance and got 142.03 points for the free, and 210.04 overall.

Crystallettes (USA) earned 115.64 points for their Avengers free program. They performed with power and speed in black dresses (total score: 178.95).

In front of their own supporters, team Hot Shivers had an amazing moment on the ice! Their program to the soundtrack of the movie “Up” was skated with grace and precision. They got 117.45, totaled 177.93 points, and placed 7th.


Jingu Ice Messenger from Japan had a fall in the No Hold bloc but didn't tarnish the performance to Hercules. Their graceful performance brought them 118.53 points, so they moved up one spot (172.60) and finished 8th.

The French champions Zoulous performed their mythical Paris program and was supported by the crowd. They skated with no major error and got 111.48 points. They finished with a score of 171.22 points.

Team Passion (HUN) got a score of 110.52 points.(162.65 in total). The team from Budapest was dressed in green, and skated with precision and had a good choreography.

Skating to Aquaman, Team Berlin 1 (GER) had a bad fall in the Group lift at the beginning of the performance. The skaters, however, showed creative features during the program and got 105.60 points (total: 159.43).

Representing Italy, Team Ice on Fire skated a romantic free program in dark blue dresses. They had a fall in the moves element but skated with confidence. They earned 99.97 points and 149.35 in total.

Team Darlings (CZE) all dressed in pink skated a clean and entertaining free program. The skaters had the opportunity to show good individual skills. They got 100.62 points, earning 147.20 in total.

Like a passionate love story, Team Olympia also from Czech Republic took the ice with grace and power. Even with a fall in the Twizzle Element, they received 94.07 points (total: 142.29).

Even though we made some mistakes and it surely wasn’t our best performance this season, we reached our goal❤️🇨🇿 thank you for your support


After the short program, Skating Graces from Germany wanted to show what they were capable of and they succeeded. The team did a powerful performance (95.75) and finished with a score of 136.10. They moved up two spots to placed 15th.

Starlight (SUI) performed their free program “Time Machine” and got 91.11 points, 131.97 in total. They had a fall at the end of the program.

In their free program, Team Illumination (NED) interpreted every detail of the music. Even with some hesitations, they totaled 77.73 points on Sunday and 115.61 in the whole weekend.

The Spanish Team Fusion has improved a lot this season. Coached by former Team Paradise captain, the skaters did a good free program in Milan and got 72.95 points. They earned 113.18 in total and finished 18th.

Team Phoenix from Belgium skated their Pirates themed program, receiving 73.38 points. With 108.39 and three unfortunate falls at the very end of the program, they placed 19th.

Dressed in grey and black, the Croatian team Zagreb Snowflakes skated a clean program but had a fall. They got 71.49 points, 107.21 in total.

Team Ice United from the Netherlands got 64.22 points for their rhythmic free program, totaling 96.68 points.

Sweet Mozart (AUT) earned 59.54 points for their shiny New York free program. They finished the competition with a total of 93.02 points.


Have a look at Saturday's recaps for Junior and Senior! 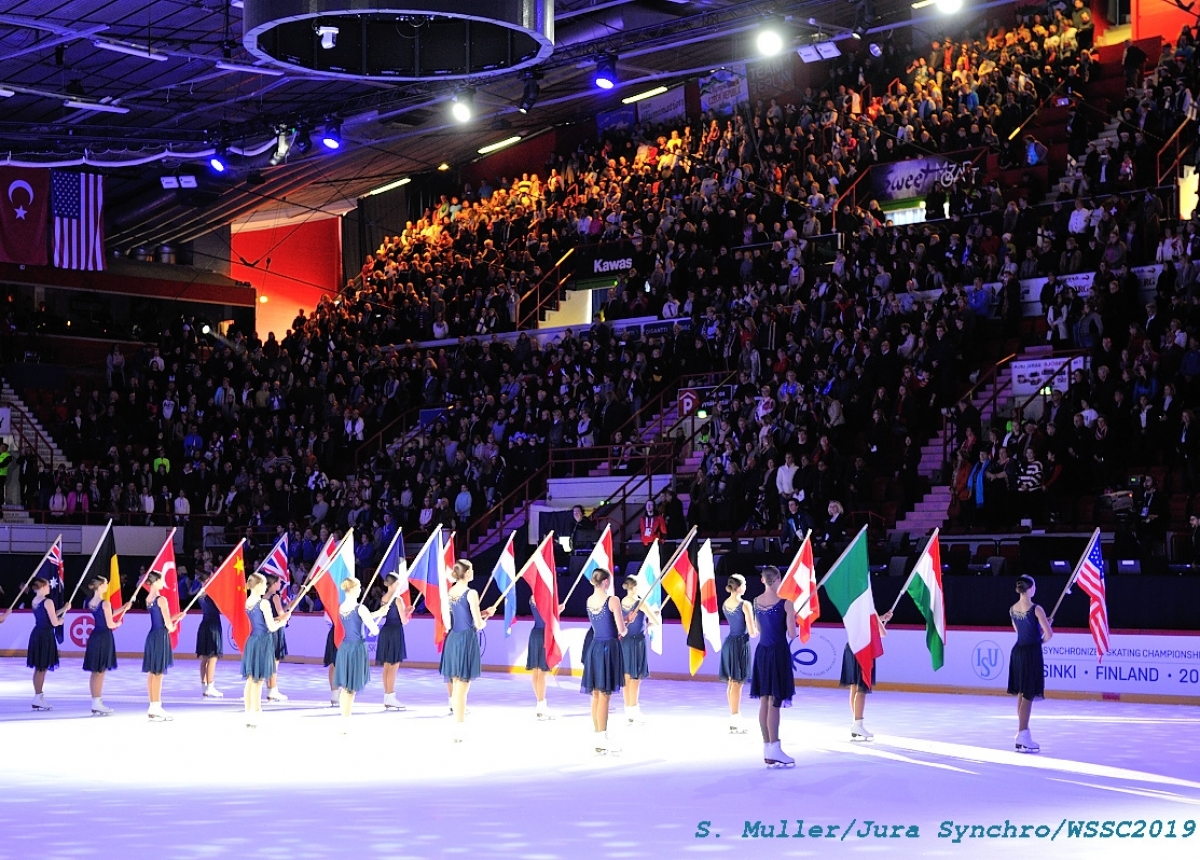 Senior Worlds 2020: "We will know more in the next three weeks"